Retrofitting, Leakage and Avoidance Of The Truth

The mccann's do a lot of retrofitting to explain away any discrepancies.
The problem is, by coming up with an explanation for something said or unsaid, for explaining why something was done or not done, they then have a gap which was previously explained away, and now need to come up with something plausible to explain it away and fill the new gap.

Since they have been deceptive from the start, there will always be holes in their version of events.
Truthful people will have few if any gaps and they can relate the event forwards,backwards and from any point in between.

It is experienced memory.

Deceptive people will have gaps, temporal lacunae, they cannot, with any reliability, recite their event backwards or from a particular point they can usually only go forwards.

This is because it is NOT experienced memory, it is a story

If one looks closely enough and listens carefully enough, one will see a truth shaped hole.
The subject tries to avoid saying anything that could be remotely incriminating, remotely truthful as the truth is sensitive to them, thus they avoid any sensitive words as they spin their spiel.

The sensitive words are words that innocent parents would use, as there is no sensitivity, there is no guilt or comeback on what they say.

With the mccanns and their chums, they avoid the sensitive stuff as it causes stress and the body and brain do not like stress.

As a result we hear verbal diarrhea, stuttering and stammering, nonsense words and gobbledygook as they try to explain away words and actions without saying anything incriminating.

For such well experienced professionals, used to dealing with the public, and explaining complicated stuff to the public, they come across and almost incoherent and unintelligible as they spin themselves into circles of deceit

This results in truth shaped holes in their language.

They also leak the truth whilst trying actively not to, the mouth speaks before engaging brain resulting in verbal oopsies.

"They want me to lie - I'm being framed.


"Police don't want a MURDER in Portugal and all the publicity about them not having paedophile laws here, so they're blaming us."'

Gerry telling us:
"there is NO evidence to implicate us in her DEATH',
Tanner telling us "I carried..." in the panorama interview when talking about how the 'abductor' she saw was carrying Maddie.


Then we have the delightful clarrie dropping the mccann's right in itCan I suggest you actually quote me accurately. I said: ‘I believe Kate and Gerry are not responsible for Madeleine’s death’.”
Then rachel oldfield happily telling us in her rogatory interview

Yeah I was just going to say that, you know Kate and Gerry are both Doctors and you know there were three other medics in the group, erm four others actually sorry, four others, erm you know so if by any chance they’d accidentally done anything to Madeleine or she was ill or erm you know something wasn’t quite right, I mean they wouldn’t have just left her and sort of tried to cover it up as an accident or you know, they would of sort of you know, come and got Matt and Russell and Dave and Fi, erm I mean you know, not just because they are Doctors, because you know they’re parents and you’d kind of go to anyone to see who could help but if you’ve got, you know Doctors as friends who were there as well, erm you know there were kind of six people there who if Madeleine had accidentally been bumped on the head or you know whatever the theories are supposed to be, erm you know, there were plenty of people there who could of you know, tried to revive a child, erm”.


Then we have exhibit #1 kate's bewk. 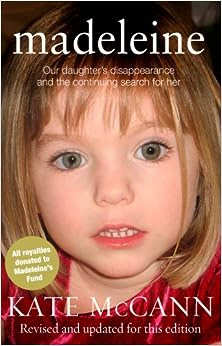 A book that was more about kate with gerry and the twins as afterthoughts, than about Maddie, For whom the book was named after.

I bet her lawyers were thrilled when they learned kate had written a book after they had told her not to answer 48 questions in case she incriminated herself.

I think, if kate was interviewed by the right person, someone who listens and doesn't judge, who is approachable and patient, someone who is empathetic and she feels comfortable with, kate would open up and talk just to relieve the stress and allowing her to start grieving properly and also to get the help she needs.

The brain wants to talk, to relieve the stress, to confess.