The Joys of Hedgehogs

Those who know me know i have a bad case of hedgehogs.
Actually a bad case of 30 and counting.
I have wild hedgehogs that visit my garden through the year, i started off with two and obviously word got round that i did 5 star eatables and lo, they did come and munch loudly and messily.
As each turned up, and me, being me, i would weigh them, sex them (sometimes easier said than done with the babies) mark them with nail polish in various color combinations and locations on their spines for easier identification then de-tick with accompanying lecture when they were loaded and a squirt of Johnson's small animal flea spray and then out they would go.
Occasionally i would have a mom turn up with babies  (yay) rarer i would see  mom and dad making out and yes, Tiggy dumped Junior and went off with a new male leaving poor Junior crestfallen and looking elsewhere for a leg over,
Hermione who is the smallest of them usually weighing about 650g  general shouts at everyone, often so hard, she goes backwards. She refuses point blank to share and if they won't move she will charge at them, funny as heck when her target is twice her size.

Anyhow mid Oct last year i went out to top up the food bowl for the hogs plus birds, feeding them on crushed peanuts, sunflower hearts, sultanas, dried mealworms and occasionally if i know no cats will be around, namely my 3 then meaty kitty bix.
I was a tad surprised to see a teeny tiny late fall hoglet stuffing its face.
Knowing they tend not to survive i brought it in sexed and weighed it (300g), de-flead and de-ticked it marked and named it and then had to figure out what to put her in.
I had an old enclosed very large kitty litter box so that did the trick. 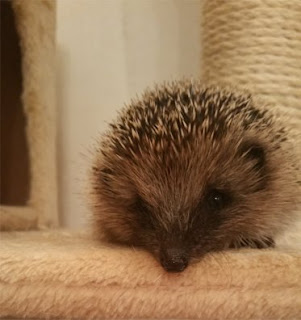 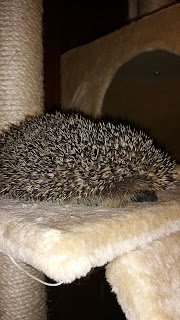 Hamble doing her best impression of a road kill 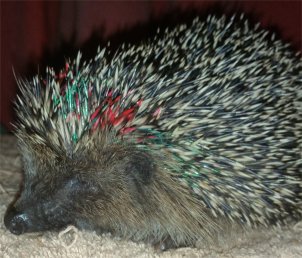 
All 3 now shared said box and all was well. 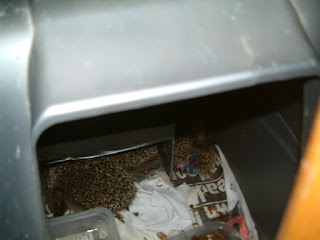 Trial nest box one when they were small


They would occasionally argue over who got the best spot, the best food or longest paddle in their water bowl and come bedtime a warm and sometimes fragrant hoggy fug  and the sound of snoring hogs or hogs talking in their sleep.
The downside is that they learned to knock on the side of the box to get my attention.
God awful hours of the night would come the knock, sounding like someone knocking at the front door and on checking and seeing no one, checking the hogs and seeing 3 hoggy faces radiating innocence, well trying to.

Something i forgot was that hoglets all start with their credentials in the same place, as they get older though, the males bits migrate north to approximately where their belly buttons would be.
Jen-Jen turned out to be a Jim-Jim, but i decided to keep him as Jen-Jen and if anyone queried i would claim Star wars or similar.

She can tell spring is in the air, the days are warming up and she wants out.
I keep telling her that not until the nights are above 6 degrees for several days so she can acclimatize, all being well the next couple weeks and then my bedroom will be my own plus 3 cats.

Her box is lined with layers of newspaper and a puppy pad cut in two one layered between paper and one on top for when she goes paddling and shredded paper for a nest or for her to chuck in her water bowl because it's fun..

It was fun trying to figure out what worked bedding and nest wise and keeping everything out the water dish but i got there in the end .
I found stick 3 sheets of newspaper between the lid and base of the box to keep it in place and the other end bent down to keep the nesting paper in almost one place worked most of the time except when she decided to see how much she could get in her water dish.

I will miss her when she is released, she will have lots of friends to play with/shout at once spring finally arrives and who knows, maybe more babies again this year as long as they don't look like Bungle.

His offspring look like they ran into a wall.

Hopefully no more disturbed nights of rampaging hog throwing a tantrum or the fragrant fug of a contented snoozing hog.

Below are just some of the wild ones that visit my garden
The nail polish helps me keep track of whom is whom when it comes to weights fleas and ticks and should any show any sign of injury or illness.
Luckily all mine seem fit and healthy. 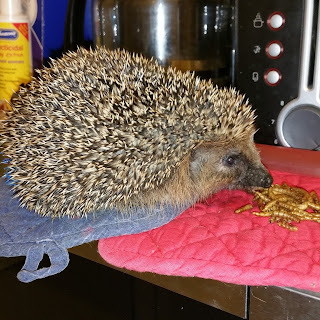 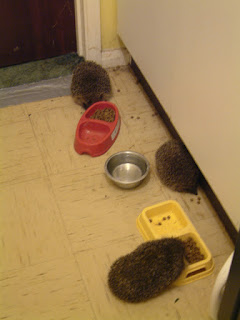 Tiggy, Junior and Hermione summer when the backdoor was open and kitty bix looked better than hoggy dins 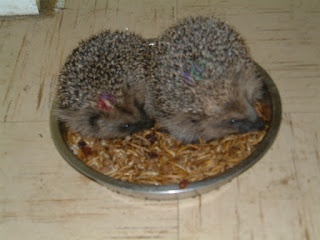 Edmond and Edwina siblings from Tiggy and Junior 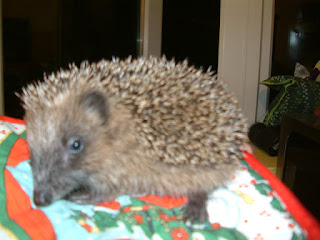 Teeny tiny Hermione as a hoglet 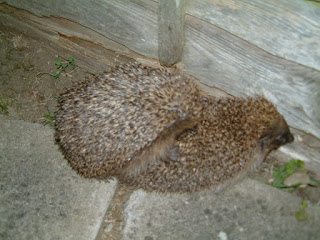